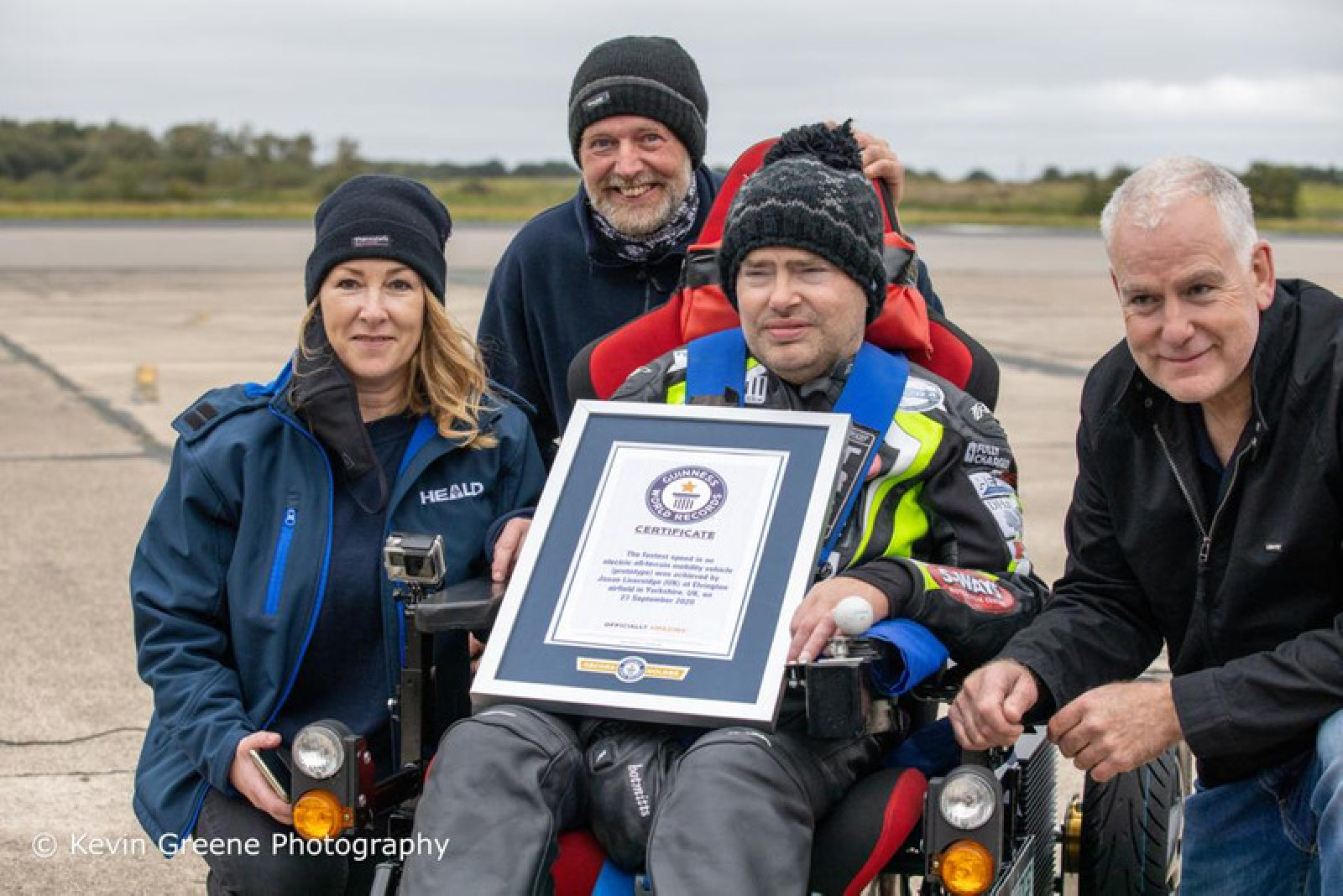 Member News
Yorkshire based security manufacturer, Heald, has supported a terminally ill man to achieve his Guinness World Record ambition by building him a bespoke electric wheelchair to enable him to achieve the record of being the first person to travel more than 60 mph (95 kph) in an electric mobility vehicle.
Jason Liversidge from East Yorkshire was diagnosed with Motor Neurone Disease in 2013 at just 37 years old. Given a prognosis that he might only have between two and five years to live, Jason set about creating a bucket list of challenges he wanted to achieve enabling him to leave behind a legacy for his two young daughters and raise money for the Motor Neurone Disease Association.
Having attempted the record back in 2018, which was met with technical difficulties, Heald has been supporting Jason by building a bespoke wheelchair to help him fulfil his ambition. The build has been led by Rod Heald, chief innovator at Heald.
Paralysed from the neck down, one of the main challenges has been creating a wheelchair which Jason can operate to hit the speeds required to meet the world record of 60mph. As Jason has a little movement in his finger, it has been vital that Heald developed an easy to operate system to help him achieve his goal.
Following a test run at Elvington Airfield just a few weeks ago, where Jason hit speeds of 59mph, a whole new motor was fitted to reach the required speed and beyond.
Having undertaken a further attempt on Sunday 27th September, Jason is now officially a Guinness World Record holder having achieved speeds of 66.826 mph.
Having finally achieved his goal, Jason Liversidge said “It has been a long challenging record to set. A lot harder than I ever imagined, and I owe a great deal to Heald for helping me to achieve it. I think it is fair to say it is world’s away from their business but Rod rose to the challenge and he along with his wife Debbie and their staff did an amazing job and gave it 150%.  I have really enjoyed working with them and hope to possibly work them in the future, providing they will have me”.
Commenting on Jason achieving the record, Rod Heald said: “I am very pleased to have been able to help Jason achieve this record and I am humbled by his determination to succeed against all odds”.
Managing Director Debbie Heald MBE added, “It has been a privilege to work with such an inspiring person. Jason certainly does not let his disability affect his ambitions and we look forward to following his next adventure”.
Heald, is one of the UK’s leading designer and manufacturers of hostile vehicle mitigation products. Its product range helps protect pedestrianised areas and high profile buildings from vehicle attacks. Over the years they have won a number of awards for innovation, in particular for their Matador bollard solution, the world’s only sliding bollard which is installed across the globe.
To support Jason’s fundraising for the MND Association click here.